As historian Leigh Schmidt tells it in his bursting-at-the-seams biography Heaven's Bride, the story of Ida C. Craddock begins with the 1893 World's Fair in Chicago.

Now, there was a lot to do at the 1893 World's Fair. You could visit an ostrich farm, ride bridge-builder George Ferris's first Wheel, gape at Edison's nascent moving pictures.

But one thing caused a far bigger splash than anything else. 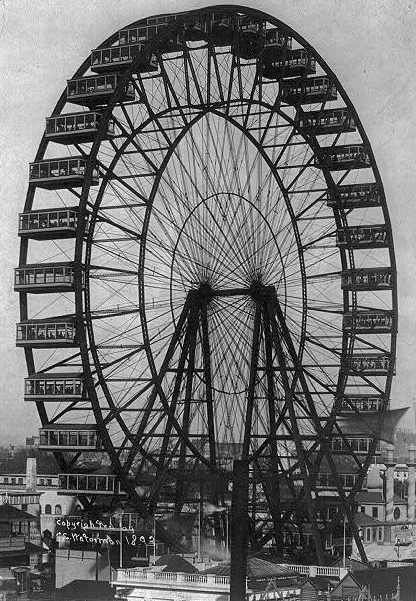 On Cairo Street, in the Egyptian Theater, onstage, to the accompaniment of tambourines, flutes, drums and castanets, one of a dozen or so women would sway her hips suggestively. As one observer noted, "while a turbaned Turk … strikes a throbbing, whirring monotone from a one-stringed instrument," the dancer "commences to sway her body in a dreamy way." In the shadow of the first Ferris Wheel, America was introduced to the belly dance.

Judging by the trumped-up media coverage that erupted out of the fair, Victorian-era America didn't much like the belly dance. The papers called it a "heathen show" ; "low and repulsive" ; "so demoralizing and so disgusting" ; the waste of "Oriental slums" ; a "horrible orgie."

But the scandal proved a "gold mine," to quote one midway promoter, so on it went.

If you're curious exactly what audiences saw, take a gander at this 1895 snippet of "Princess Ali," the star of the Midway Plaisance: 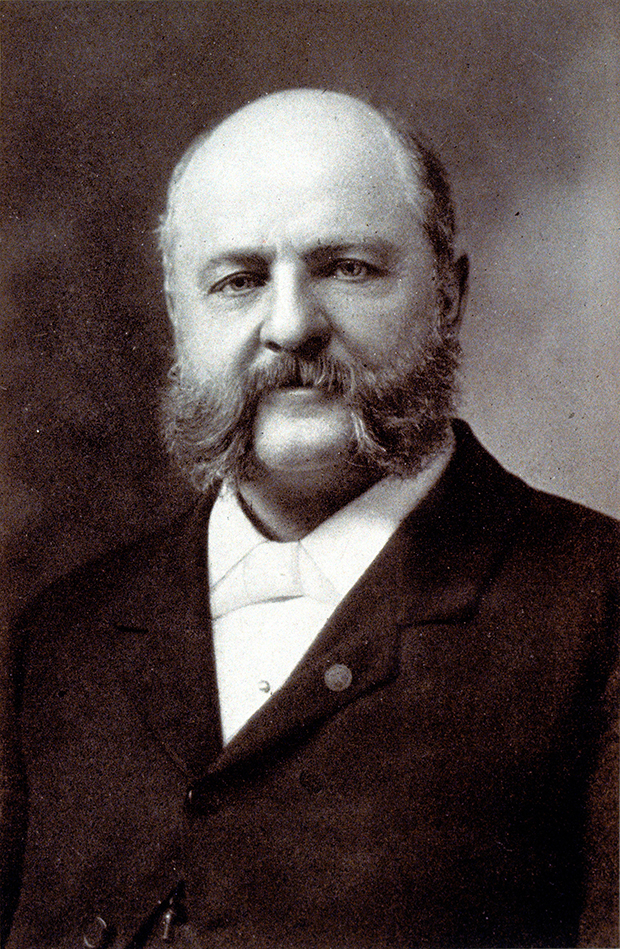 One powerful man took it on himself to shut down this "astonishing anatomical exercise." A hefty man, his name was Anthony Comstock and he was a US Postal Inspector and founder of the New York Society for the Suppression of Vice.*

Comstock worried that these "shameless women" and what he called their "Kootchy-Kootchy Dance" were perverting the whole country. One inspector working under him said "I would sooner lay my two boys in their graves than that they should look upon the sights I saw." Another, upon exiting the theater, said "I have been to the mouth of hell to-day."

(At one point, the husky Comstock was so furious about this dance that he wanted to demonstrate to a reporter exactly what was wrong with it. He rose from his office chair, arched his arms and jiggled his own imposing midsection. "Of course I can't do it exactly as they did," he lamely explained, "I am not as little as they are.") 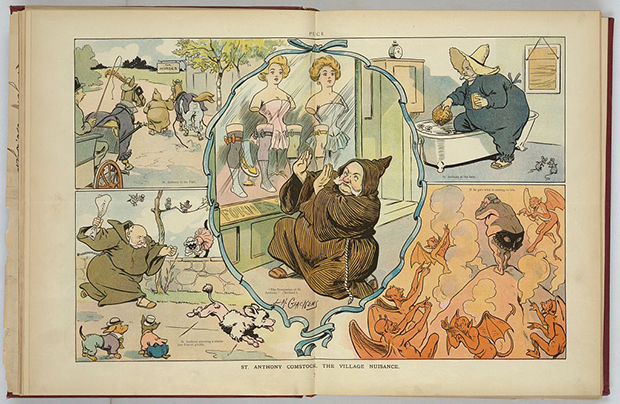 Editorial cartoon of Comstock as a monk (image via loc.gov)

One of the only people who had the nerve to stand up to the moral crusader Comstock was an unmarried, thirty-six-year-old stenographer with sparkly blue eyes. Enter Ida C. Craddock. 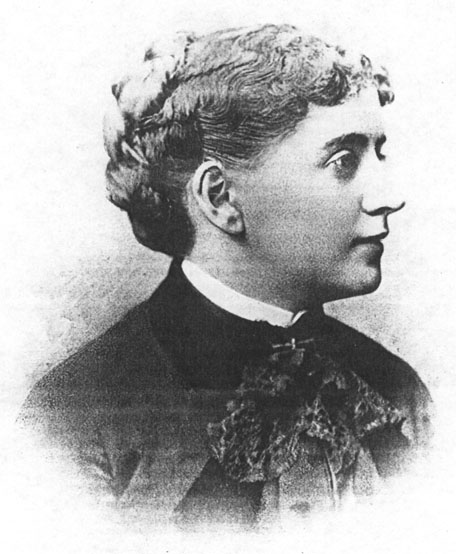 Craddock was raised in Philadelphia by her single mother, a devout Evangelical Christian. Even as a high-schooler she was a freethinker and an activist, making it her cause "to force open the University of Pennsylvania for the admission of women." It worked … for a little while. After passing the grueling entrance exams, she was the first woman accepted into the undergraduate liberal arts program at Penn. But a month into her first-year-fall, administrators panicked and kicked her out. She became an autodidact, and joined some high-octane reading groups and salons. One thing she taught herself was Pitman short-hand, and she made a living writing steno textbooks.

Now, along comes the belly dance brouhaha. Not only does Craddock argue that the dance shouldn't be censored, but in the altogether opposite extreme, she argues that it should be "performed far and wide throughout our country."

To Craddock, the belly dance was not scandalous and disgusting. Rather, it was edifying, a much-needed mix of sexuality and spirituality. (Craddock saw sex in general as a way to inculcate "communion with Deity as the third partner in marital union." A hallowed menage à trois, if you will.) And for those who didn't buy that argument, at the very least the dance was a "pre-nuptial educator of our young people." As she saw it, the belly dance was good for body, mind and soul.

Needless to say, Craddock's position was entirely counter to the Evangelical mood of the time. (Clergymen regularly made denunciations like "dancing is a heathen institution" that holds a prominent place only in "Sodoms and Gomorrahs.") One prominent Episcopal priest reacted to her argument: "Indeed, the plea affords a powerful and all-sufficient reason for [belly dancing's] banishment not only from the World's Fair, but from the face of God's earth."

As an ad-hominem attack on Craddock, vocal religious activists noted that the unmarried Craddock's explicit claims betrayed an immoral life. And indeed some of her claims seemed to hint that she was a bit of a libertine: Craddock wrote that the belly dance "trains the muscles of the woman in the endurance desirable in the wife … and therefore increases her capacity, not only for receiving but also for conferring pleasure."

Her critics immediately questioned: how could Ida Craddock know so much about the details of sex - down to the "final quivering of passion" - if, as a lifelong spinster, she had never had sex?

Craddock's response just about knocked everyone off their feet.

She claimed, for starters, that she was married. Weird.

Weirder still was who she claimed she was married to: a ghost. "My husband is in the world beyond the grave, and had been for many years previous to our union …"

She never revealed her other-worldly husband's earthly name, referring to him in public only as Soph.**

Not only was Craddock married to this angelic Soph, but also she celebrated that conjugal union physically. To be blunt, they had sex.

An example from her diary of Thursday Oct 11, 1894: "Last night, Soph and I united, mainly at the clitoris, where his organ was for a great part of the time strongly perceptible in its texture …" Hmm.

And not only did they have sex.

They had a lot of sex.

Apparently, Craddock and her specter-husband were so active (and every night!) that the neighbors regularly complained about the noise.

Nobody quite knew what to do with this information. Many believed she was insane. Her own mother tried to have her institutionalized. But after a three-month stint in the Pennsylvania Hospital for the Insane, they released her because they didn't actually find anything wrong with her.

By this time, the scandal of the belly-dance had faded but now Ida herself was in the public light. The plump moral crusader Anthony Comstock tried to send her to jail, and she only stayed out because the famous lawyer Clarence Darrow posted her $500 bail.

Now if the story ended here, it'd be strange enough. But it gets exponentially stranger.

To defend herself and her spirit groom and her belly-dancing friends and the spiritual potential of sex, Craddock started writing. And writing. And writing. Her articles and books took on titles like "Spiritual Joy," "Psychic Wedlock" and "Heavenly Bridegrooms" (Wasn't the Virgin Mary herself, she argued, impregnated by a Heavenly Bridegroom?) In 1919, one reviewer wrote up the last of these as "one of the most remarkable human documents ever produced."

Throughout her thirties, she also explored Unitarianism, Christian Science, Hypnotism, Telepathy, and Crystal Gazing. She had enough followers that she started her own church, and she became known as the High Priestess and Pastor of the Church of Yoga.

Craddock's mother, an Evangelical Christian, was not too happy about any of this. She collected up Craddock's papers, as many as she could, and burnt them.

Now, most of the advice Ida Craddock gave to the American people was a century ahead of its time. She said that women, even married women, needed to give consent for sex, otherwise it's rape. She said that sex is not just about childbearing, but should also be pleasurable for both partners. She said that women should be able to express themselves, through their words and their bodies.

All the while, the portly moralistic Comstock grew more and more furious, looking for ways to get her behind bars.

After many attempts foiled by Craddock's freedoms of press and religion, Comstock eventually found a loophole in arcane postage laws. Apparently you couldn't distribute profane materials through the US Postal system. Meanwhile Craddock sent all her advice literature through the mail to squeamish adults who couldn't bear being seen with her or her pamphlets in public.

Craddock was arrested and tried. The judge wouldn't let the jury see the evidence - her book "The Wedding Night" - because it was "obscene, lewd, lascivious, dirty." She refused to plead insane and was sentenced to three months hard labor.

Rather than serve the sentence, which she took as a tacit acceptance of her own guilt, the 45-year-old Craddock decided to end it all. "The rigors of prison life would be equivalent to my death warrant" so she felt "justified in choosing … as did Socrates, the manner of my death." She slashed her wrists with a razor and inhaled gas from her stove.

Just before she died, she composed two suicide notes. As she wrote them, she felt "strangely serene and calm" knowing her husband was waiting for her. One was for her public. The other was for her mother. Both are poignant and powerful.

She asked her public to protect her work from "that unctuous sexual hypocrite Anthony Comstock," hoping in particular that her manual "Right Marital Living" would survive: "It sets forth a gospel of marriage which is being preached by no other teacher in America. Its teachings will make your married lives healthier, happier, holier."

Craddock's final letter to her strict and disapproving mother is nothing short of tragic. And with an excerpt, we'll end the story of Ida Craddock.

I know you will grieve over me for having taken my life.... My dear, dear mother, oh, how sorry I am to hurt you, as I know this act will do …  I maintain my right to die as I have lived, a free woman, not cowed into silence by any other human being. … The world is not yet ready for all the beautiful teachings which I have to give it. Other people will take up my work … some day--will take it up where I laid it down, and will start from where I left off and do better work than they could have done but for me. Some day you'll be proud of me.   […]

*Actually, the word "comstockery" has come to mean 'excessive opposition to supposed immorality in the arts' and was supposedly coined by playwright George Bernard Shaw after Comstock called him an "Irish smut dealer."

**Allegedly, Soph proposed to Craddock while he was alive, but Craddock - then 17 years old - had rebuffed him and he died soon after. He reappeared to her in his spectral incarnation fifteen years later.

NOTE: Inspiration and all factual details for this post came from Leigh Eric Schmidt's chock-full biography Heaven's Bride: The Unprintable Life of Ida C Craddock, American Mystic, Scholar, Sexologist, Martyr and Madwoman, as well as from a talk Schmidt gave at the Harvard Divinity School that I attended last spring that left me dumbstruck (you can listen here).

If Craddock's story makes you want to go straight to the source, head to Southern Illinois University's Special Collection, where you'll find six boxes of her correspondence and original manuscripts with titles like "Lunar and Sex Worship," "The Rights of Plant Life," "Sexual Starvation of the Young," "Male Continence," and (my favorite of her titles) "Stockings and Their Numerous Holes."