Dark Side of the Earth

200 miles above Earth's surface, astronaut Dave Wolf -- rocketing through the blackness of Earth's shadow at 5 miles a second -- floated out of the Mir Space Station on his very first spacewalk. In this short, he describes the extremes of light and dark in space, relives a heart-pounding close call, and shares one of the most tranquil moments of his life.

When we were putting together our live show In the Dark, Jad and Robert called up Dave Wolf to ask him if he had any stories about darkness. And boy, did he. Dave told us two stories that  became the finale of our show. 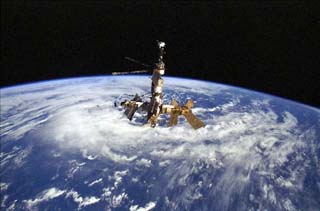 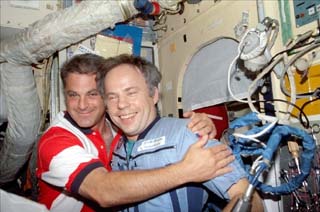 Back in late 1997, Dave Wolf was on his first spacewalk, to perform work on the Mir (the photo to the right was taken during that mission, courtesy of NASA.). Dave wasn't alone -- with him was veteran Russian cosmonaut Anatoly Solovyev. (That's a picture of Dave giving Anatoly a hug on board the Mir, also courtesy of NASA).

Out in blackness of space, the contrast between light and dark is almost unimaginably extreme -- every 45 minutes, you plunge between absolute darkness on the night-side of Earth, and blazing light as the sun screams into view. Dave and Anatoly were tethered to the spacecraft, traveling 5 miles per second. That's 16 times faster than we travel on Earth's surface as it rotates -- so as they orbited, they experienced 16 nights and 16 days for every Earth day.

Dave's description of his first spacewalk was all we could've asked for, and more. But what happened next ... well, it's just one of those stories that you always hope an astronaut will tell. Dave and Anatoly were ready to call it a job and head back into the Mir when something went wrong with the airlock. They couldn't get it to re-pressurize. In other words, they were locked out. After hours of trying to fix the airlock, they were running out of the resources that kept them alive in their space suits and facing a grisly death. So, they unhooked their tethers, and tried one last desperate move .

In the end, they made it through, and Dave went on to perform dozens more spacewalks in the years to come, but he never again experienced anything like those harrowing minutes trying to improvise his way back into the Mir.

After that terrifying tale, Dave told us about another moment he and Anatoly shared, floating high above Earth, staring out into the universe ... a moment so beautiful, and peaceful, we decided to use the audience recreate it, as best we could, for the final act of our live show. 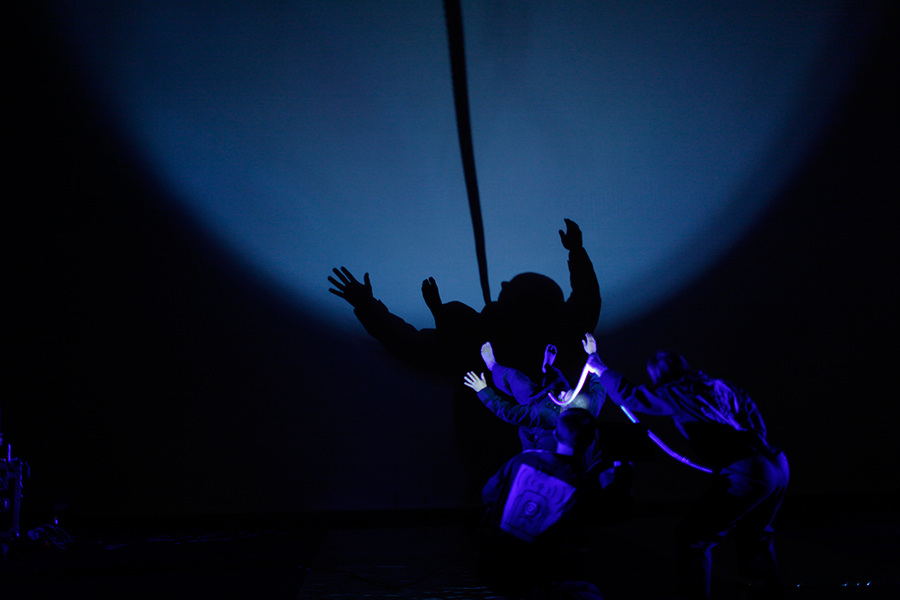 The audience turns Portland's Keller auditorium into a view of outer space with thousands of LED lights (photo by Lars Topelmann): 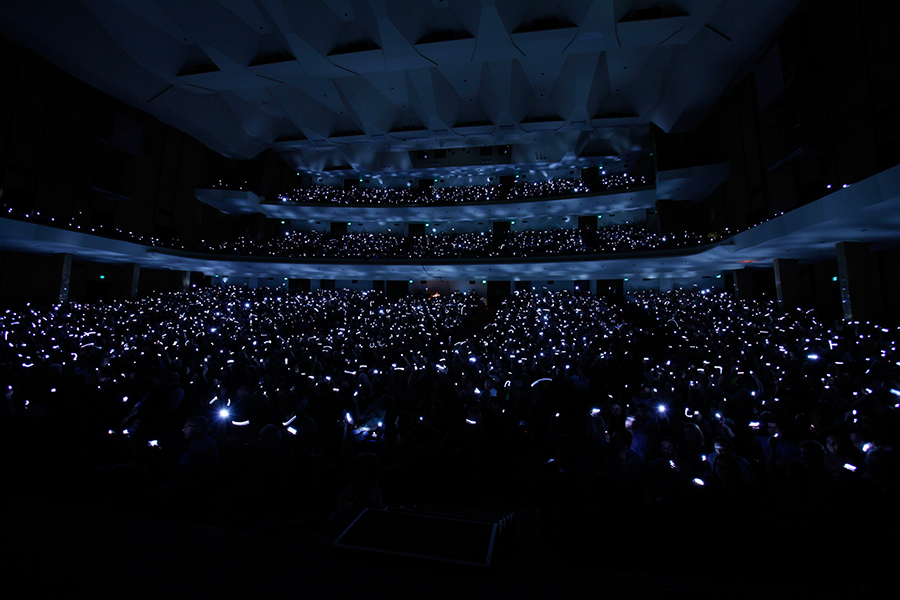 Here's Dave Wolf in the dark darkness of space, performing a spacewalk in 2009 (courtesy of NASA): 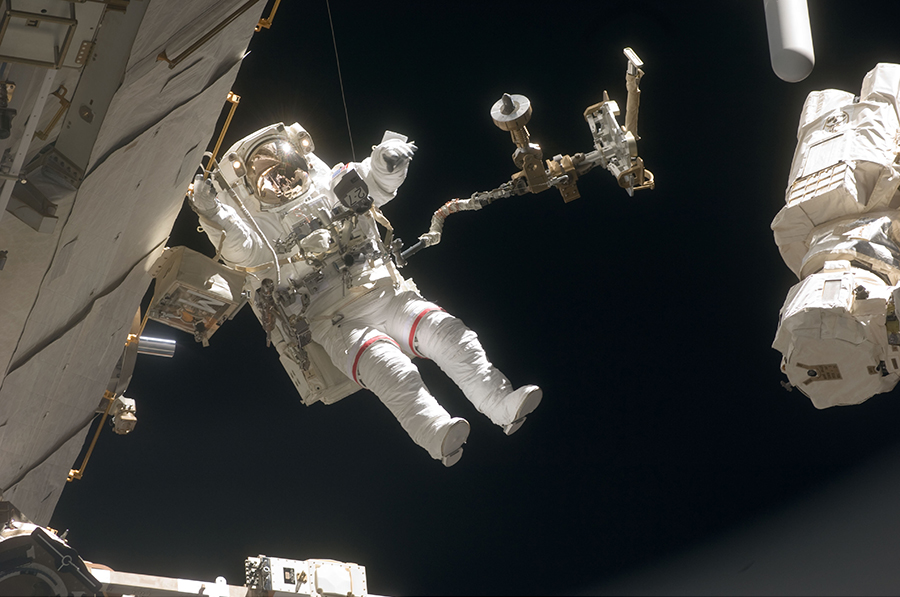 To give you an idea of what it looks like during the brightness of day, here's another photo taken in 2009 -- more than a decade after the adventure described in our podcast -- this time of astronaut Tom Marshburn (Dave Wolf is with him, out of frame, photo courtesy of NASA): 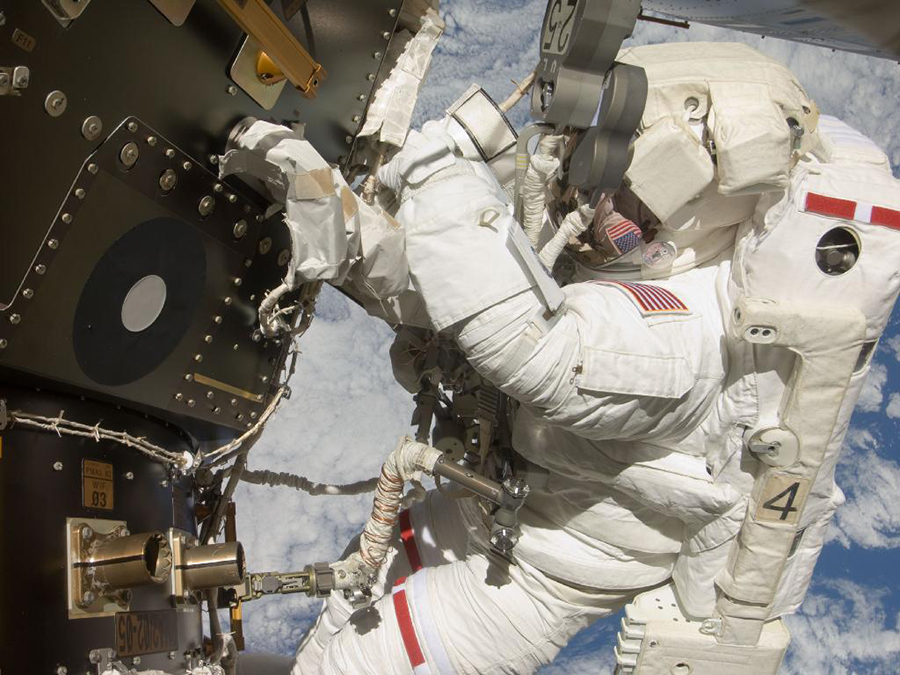 We had such an amazing time touring around the country with Radiolab Live: In the Dark. Here's a slideshow of some favorite action shots: