An Announcement from Radiolab 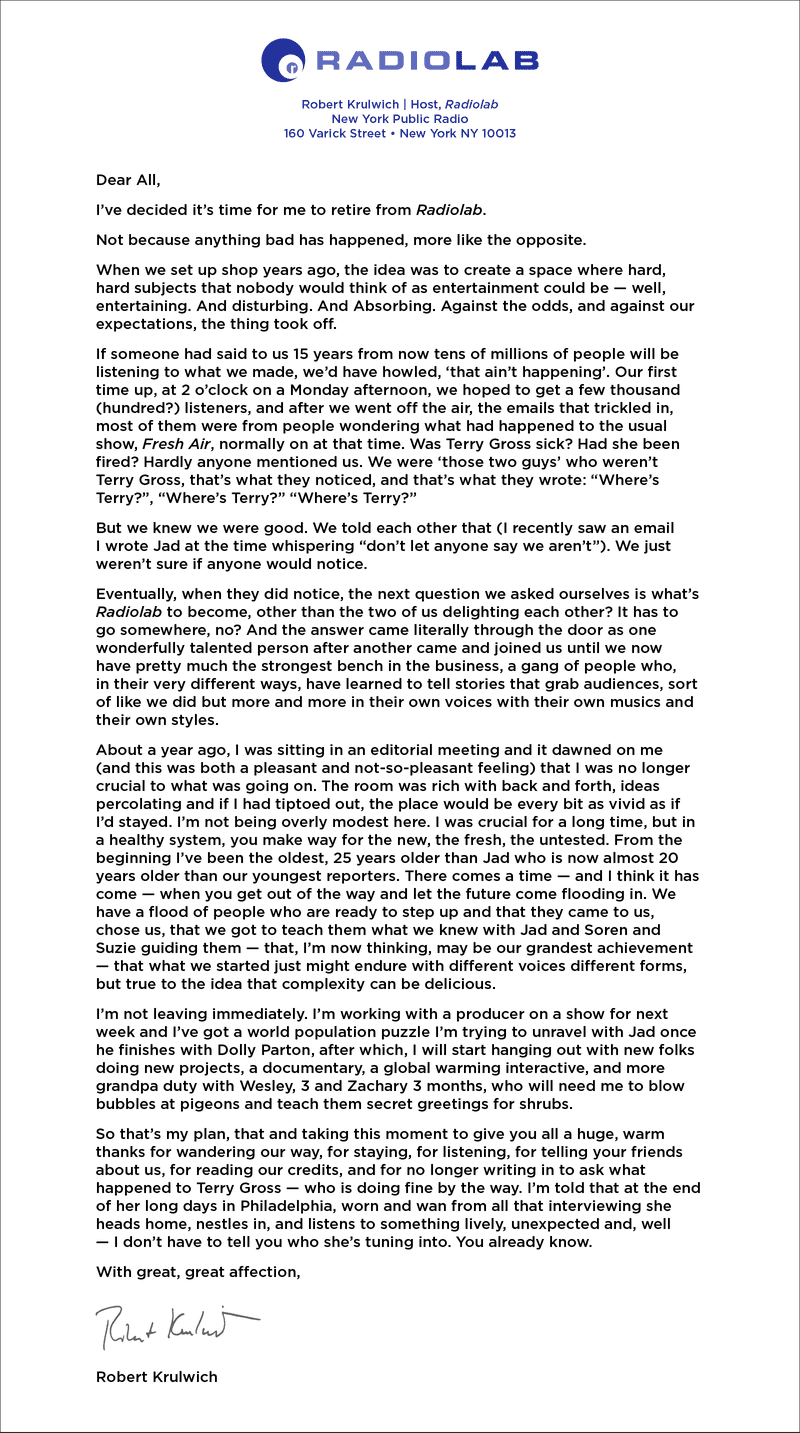 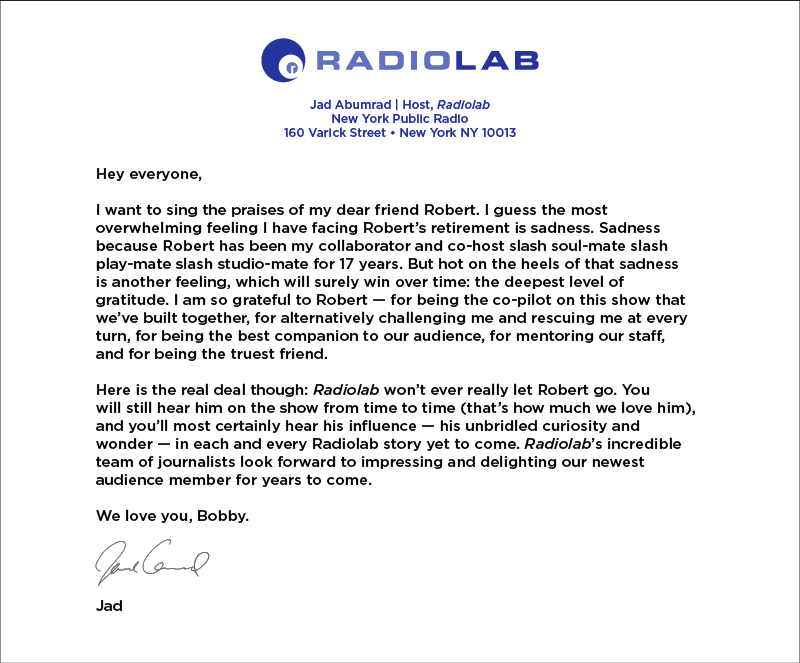 I’ve decided it’s time for me to retire from Radiolab.

Not because anything bad has happened, more like the opposite.

When we set up shop years ago, the idea was to create a space where hard, hard subjects that nobody would think of as entertainment could be — well, entertaining. And disturbing. And Absorbing. Against the odds, and against our expectations, the thing took off.

If someone had said to us 15 years from now tens of millions of people will be listening to what we made, we’d have howled, ‘that ain’t happening’. Our first time up, at 2 o’clock on a Monday afternoon, we hoped to get a few thousand (hundred?) listeners, and after we went off the air, the emails that trickled in, most of them were from people wondering what had happened to the usual show, Fresh Air, normally on at that time. Was Terry Gross sick? Had she been fired? Hardly anyone mentioned us. We were ‘those two guys’ who weren’t Terry Gross, that’s what they noticed, and that’s what they wrote:  “Where’s Terry?”, “Where’s Terry?” “Where’s Terry?”

But we knew we were good. We told each other that (I recently saw an email I wrote Jad at the time whispering “don’t let anyone say we aren’t”). We just weren’t sure if anyone would notice.

Eventually, when they did notice, the next question we asked ourselves is what’s Radiolab to become, other than the two of us delighting each other? It has to go somewhere, no? And the answer came literally through the door as one wonderfully talented person after another came and joined us until we now have pretty much the strongest bench in the business, a gang of people who, in their very different ways, have learned to tell stories that grab audiences, sort of like we did but more and more in their own voices with their own musics and their own styles.

About a year ago, I was sitting in an editorial meeting and it dawned on me (and this was both a pleasant and not-so-pleasant feeling) that I was no longer crucial to what was going on. The room was rich with back and forth, ideas percolating and if I had tiptoed out, the place would be every bit as vivid as if I’d stayed. I’m not being overly modest here. I was crucial for a long time, but in a healthy system, you make way for the new, the fresh, the untested. From the beginning I’ve been the oldest, 25 years older than Jad who is now almost 20 years older than our youngest reporters. There comes a time — and I think it has come — when you get out of the way and let the future come flooding in. We have a flood of people who are ready to step up and that they came to us, chose us, that we got to teach them what we knew with Jad and Soren and Suzie guiding them — that, I’m now thinking, may be our grandest achievement — that what we started just might endure with different voices different forms, but true to the idea that complexity can be delicious.

I’m not leaving immediately. I’m working with a producer on a show for next week and I’ve got a world population puzzle I’m trying to unravel with Jad once he finishes with Dolly Parton, after which, I will start hanging out with new folks doing new projects, a documentary, a global warming interactive, and more grandpa duty with Wesley, 3 and Zachary 3 months, who will need me to blow bubbles at pigeons and teach them secret greetings for shrubs.

So that’s my plan, that and taking this moment to give you all a huge, warm thanks for wandering our way, for staying, for listening, for telling your friends about us, for reading our credits, and for no longer writing in to ask what happened to Terry Gross  -- who is doing fine by the way. I’m told that at the end of her long days in Philadelphia, worn and wan from all that interviewing she heads home, nestles in, and listens to something lively, unexpected and, well --- I don’t have to tell you who she’s tuning into. You already know.

I want to sing the praises of my dear friend Robert. I guess the most overwhelming feeling I have facing Robert's retirement is sadness. Sadness because Robert has been my collaborator and co-host slash soul-mate slash play-mate slash studio-mate for 17 years. But hot on the heels of that sadness is another feeling, which will surely win over time: the deepest level of gratitude. I am so grateful to Robert – for being the co-pilot on this show that we’ve built together, for alternatively challenging me and rescuing me at every turn, for being the best companion to our audience, for mentoring our staff, and for being the truest friend.

Here is the real deal though: Radiolab won't ever really let Robert go. You will still hear him on the show from time to time (that’s how much we love him), and you’ll most certainly hear his influence -- his unbridled curiosity and wonder -- in each and every Radiolab story yet to come. Radiolab’s incredible team of journalists look forward to impressing and delighting our newest audience member for years to come.

We love you, Bobby.