While we were making the “Translation” episode, we started asking ourselves what we could do to make this dizzying swirl of stories feel cohesive. We did a listener call out for curses in other languages. If you aren’t afraid that they will set your ears aflame – and they will – you can listen to them here.

In a characteristically Radiolabby moment of goofing around in the studio during a script recording session, Robert Krulwich began imitating a language lesson LP…with the twist of it being an LP that helps us to learn Robert’s imaginary native tongue “Luden.” And then, there was the music.

We struck on the idea of doing 2 way translations – transposed and translated. It would help things to feel a bit farther away…like something that you had to strain a bit to find the common reference point.  We started with songs that everybody knows – Amazing Grace, I’ve been Working on the Railroad, etc. We were lucky to find Jon Dyden to do our arrangements, and he also played piano and accordian. He brought in Leah Torres to translate and sing in German. They recorded a few songs for us  - here are a couple of the rough mixes that we didn’t use:

And then the one that we ended up using to follow the piece about Nataly Kelly, the telephone translator.

While we loved the sounds of these, as a framing conceit to make the hour cohesive, we weren’t quite there yet. Jad said “It sounds like a joke I’m not in on. Why German? What does it mean?” We realized that we would need to go broader for it to serve the role we had envisioned.

So, naturally, we called a puppeteer. Not just any puppeteer, but the very special one who we’d toured with during Apocalyptical, Miron Gusso. I got him in the studio and asked him, “Try it like a Russian Tom Waits” 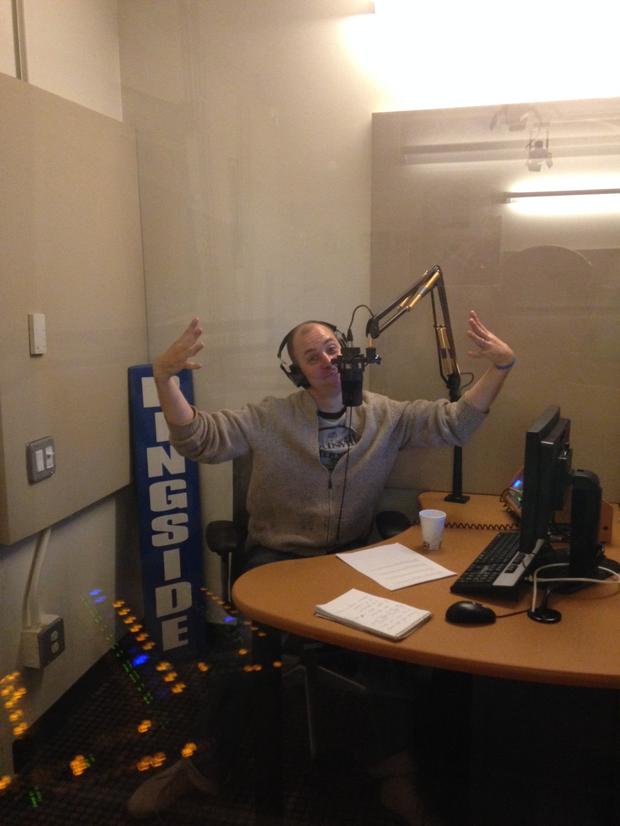 While we scrambled to find folks who could both translate and sing, I still wasn’t completely sure it would work. Was this a doomed experiment? Would it still sound like an inside joke? Or, as Krulwich cautioned, just too literal? My concerns melted away when Kiran Ahluwalia came into the studio. First of all, if you don’t know her, go watch her video and then buy her new album, Sanata:Stillness. She was born in India, raised in Canada and lives in NYC. She’s won the Juno Award (Canada’s Grammy) twice. Dulcet doesn’t even begin to describe how lovely I find her voice. She sang 3 Blind Mice in Hindi for us.

From there, it was a mad dash to the finish line. We got Viesta Traore, from Mali, to sing in Bambara for us.

Then, our intern, Reem Abdou, brought in her mother, Azza Khalil for a heart wrenching rendition of Amazing Grace in Egyptian Arabic

And Last but not least, Margaret Glaspy was an incredibly generous good sport to not only take a shot at translating Aura Lee (which might sound a lot like Love me Tender to you, but for the record, that tune was based on the earlier traditional song) into Korean using pretty much entirely google translate BUT also she let me push her to sing it at a crazy fast pace and then use her stumbles for the closing music. Here is arguably a much more beautiful version, for your listening pleasure.