Back in 2010, we featured a segment on “devil tumors,” (officially known as DFTD, or devil facial tumor disease) - a really gnarly, contagious tumor that plagues Tasmanian devils. It was first discovered in 1996, when wildlife photographer Christo Baars stumbled upon this: 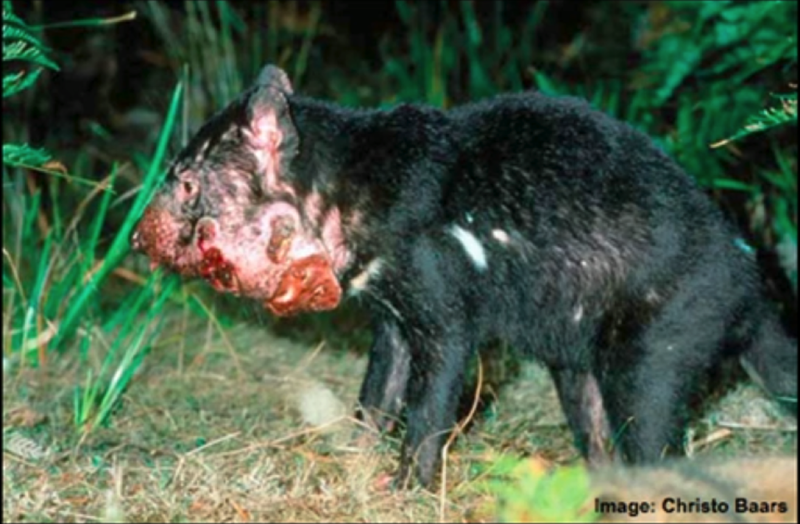 What made this tumor so terrifying - aside from its grotesque appearance, bulging from eye sockets and dangling off cheeks - was its crazy contagiousness. Cancer is not a cold: it’s not supposed to be catchable … and it was assumed to be a freak of nature.

But now, a second, contagious tumor has been discovered. Ruth Pye, a graduate student at University of Tasmania, documented it in March 2014.

“It’s just turned everything upside down,” Elizabeth Murchison, a researcher studying DFTD at University of Cambridge, told me over the phone. “For us working in the field, it’s the last thing we could have possibly imagined!”

This new tumor, DFT2, appears totally different from the first one (relabeled DFT1). That’s important, because it’s not just a mutation. Murchison believes the two sprang up independently of each other.

Why’s that? Well, researchers believe all DFT1 cases originated from one female devil that probably lived 20-30 years ago. They all have pretty much the same genetic markers and two inherited X chromosomes, because they all got their DNA from that first lady devil’s tumor.

But DFT2 has totally different genetic markers and X and Y chromosomes, suggesting it probably came from a male devil in more recent years - an altogether independent lineage from our original lady devil. In fact, one article reports that analysis of their genomes suggests the two tumors are as different from each other as they are from healthy devil cells. What they do have in common is their terrifying, contagious ability to spread between devils.

This news is bad for devils, as researchers have continued finding new cases of DFT2 (now 10!), and DFT1 has spread to almost all areas of Tasmania, wiping out large numbers. But it also has wider implications for the rest of us.

“I mean, just a few years ago, we thought there were only two [contagious cancers] - in Tasmanian devils and dogs - and now, as of 2015, we know there are four,” Murchison reflected. In addition to DFT2, a contagious water-borne leukemia in soft-shell clams was confirmed just last year.

These new discoveries have some researchers thinking this whole contagious cancer thing might be more common - and perhaps not as restricted to the quirks of cancer-prone, in-bred Tasmanian devils - than originally thought.

It still seems unlikely that we’ll be worrying about contagious cancer in humans any time soon, but Elizabeth thinks that these findings and our increased awareness about these cancers mean it’s more likely we’ll continue finding them in other species.

“We don’t really understand why certain species have got them,” Murchison concluded. “And until we do, I guess we can assume that all species could get transmissible cancers.”

For the primary article this update was based on, please see Ed Yong’s “The Curious Case of a Contagious Cancer” in The Atlantic.