Lions and Tigers and Illegal Wildlife Goods (Oh my!)

If you caught our episode on big-game hunting, you know how contentious it can be when animals are killed and traded illegally. But what happens to all those illegal hunting trophies? One curious Radiolab listener wrote in to tell us about a strange place where outlawed wildlife goods often end up.

Below is an edited excerpt of a conversation we had with Cole Schaefer, a Wildlife Repository Specialist who works among the halls of mounted animals, leather goods, and other weird and wild paraphernalia at the National Wildlife Property Repository in Commerce City, Colorado. 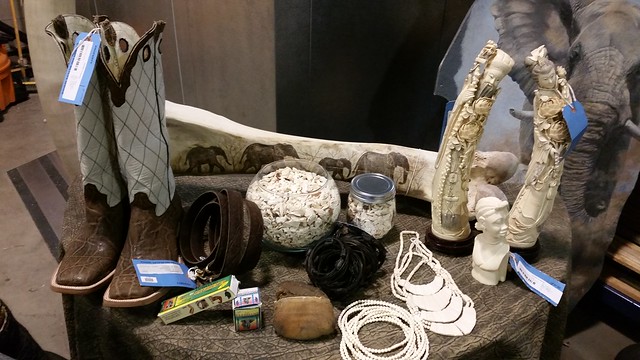 (Click through the slideshow above to see images of the repository.)

Radiolab: What is the purpose and goal of the repository?

Cole: NWPR receives, stores and distributes wildlife products from around the nation. Everything we have is from closed case investigations. There are smaller repositories for ongoing cases. But we are really a collection facility used to house confiscated wildlife. There are no live animals at the repository.

Part of our goal is to educate the public, which can be challenging because each species is unique and the laws and regulations for different species are unique, too. A lot of Americans don’t really have any idea about legal wildlife trade, which is a $300 million industry, let alone the illegal wildlife trade, which is impossible to valuate, but is estimated to be in the hundreds of millions range as well.

Can you describe the repository for me?

It helps to envision a warehouse. It’s a 16,000 square foot facility, filled to brim with just about any taxa you can imagine. Overwhelming is the phrase I hear most from people. Imagine rows and rows that are about 10-12 feet high and every type of animal you can imagine, from butterflies to rhinos. Each row is separated by species, if possible -- or by family or genus.

We basically have all the products you can make out of wildlife--that ranges from “curios” -- strange things made of out wildlife don’t even look like wildlife anymore-- all the way through to the typical fur coat. The fashion industry has seen a resurgence of wildlife products, what I always say is you can outfit yourself from head to toe in wildlife products, and that could be of the same species, like alligator, or a mix of different species.

We also have taxidermed mounts. And an entire aisle of big cats, which is where a lot of the macabre is focused. Tigers in particular are being poached for rugs, so we have rows of the heads of these tigers that have been used for making rugs.

And then there’s traditional chinese medicine-- that’s a huge use of wildlife, where parts of the animal are ground up into powder.

So we have rows of that, to fashion, to the curio, migratory bird mounts. Then there’s the critically endangered species--tigers, rhinos, elephants--which we put on display so it's a little more museum-like. But otherwise we are a working warehouse.

What is it like to be in the space?

I always get asked if it's disturbing or depressing to me. But it's really a state of mind thing. Of course if you look at each object you can get despondent about wildlife and loss of life. But I look at it as a success story - these items were found to be illegal so having them here to educate people with means they are hopefully making an impact.

What are the most common items?

The most common items would be some type of reptile or amphibian leather product--crocodile or alligator, made into boots, iphone covers, etc.

How do things end up at the Repository?

The repository is full of 1.5 million items, but that’s a thimble full of what comes into the country every year-- most of that being legal. But wherever there’s legal trade, there’s also illegal products coming in.

We have wildlife inspectors -- like customs for wildlife at seaports and airports around the nation. Then there are also special agents that work under cover. The inspector is front line in making sure regulations and laws are in order for legal wildlife, then if something illegal does take place, it gets passed to a special agent. We’re mostly talking about commercial shipments. The shipments are confiscated by inspectors. Typically the vendors abandon the items immediately, because they don’t have the proper permits to carry or sell them.

We take an item if we determine it has an educational component and is in good condition.  Other items are incinerated, typically if they are too old and not usable.

We’re not really interested or concerned with an American who might be bringing one item home from a marketplace in another country, but we do want to educate those individuals. If they travel and see something in a marketplace in another country, that doesn’t mean it's legal to bring back to the United States. But again, that scenario is a lot different than someone making a large shipment and looking to make money off of wildlife products.

What counts as educational value?

We like to have things from different taxa species. Something that’s not too small and couldn’t be pocketed from the repository. For example, with boots, we might put one boot out for display. Some things we might want because of their rarity, or because because they’re so common, like alligator boots. We want to show kids the wildlife diversity and how that diversity is made into wildlife products.

So, most of the stuff in the repository doesn’t come from someone having an estate sale and then a secret agent stopping by and confiscating things?

No, definitely not.  But one of our most extreme items did come to us sort of like that. We have a tiger fetus mount. And somebody had this fetus, put it onto a mount and tried to sell it for a lot of money on craigslist. An undercover agent found it and got them. Generally we’re looking for that sale, not just ownership.

For instance, there was an elderly woman who had a full mounted polar bear her father had given her from World War II when he was stationed in Alaska. And the polar bear population up there was different then than it is now. She was concerned about whether she could bequeath the bear to her granddaughter. And the answer is -- there’s no problem with that. That sort of thing isn’t our main focus. But it is always helpful to have an affidavit in cases like that to escort the polar bear so there’s no doubt of its history.

Are there many hunting trophies in the repository? How do those end up there?

We have a handful of trophy mounts. For the most part these are from cases where the person followed permits, we know it came from well regulated hunt and is an animal that could be hunted. Typically the infraction involves the sale of these trophies. But each case is different.

What sort of trade or market exists for these objects? What would happen if they weren’t at the repository?

That’s a broad and expansive question! For many items we have no way to know whether something has been sustainably harvested. It goes back to the same idea behind market hunting from a few centuries ago where prior to regulation, people would just take migratory birds for example. They’d hunt the whole bird just to take plumes for ladies clothing. And they had no way to know if they were taking too many. It’s the laws and regulations that are put into effect to protect these populations that give us the information. And there are two authorities that we depend on to help create laws and regulations. One is the scientific authority, which can look at a population and say whether is can sustain a harvest based on its carrying capacity and other biology.

Then it goes to the management authority and they give out permits. They consider based on a population each year how many permits to give out and who to give them to.  And the next year they revisit and adjust accordingly. Relying on these two authorities gives us confidence that we’re not overharvesting that population. And this is done on a global scale through CITES. Each country has its own agenda and cultural identities with species that weighs in differently.

What could happen? Well we have these laws and regulations so we don’t have to find out.

What in your mind makes the repository a valuable place?

Definitely our mission to promote awareness of not only legal but illegal wildlife trade. Wildlife trafficking was once a crime of opportunity--individuals and small groups looking to make a fast buck. That’s changed dramatically. Now it's under the purview of international crime cartels who are well structured, organized and capable of illegally moving huge quantities of wildlife product. Some of the money from illegal wildlife product sales has been used to fund insurgencies like Al Shabaab for example.

How can people see the objects at the repository?

Right now we only have two full time employees and we’re a working warehouse. When we get requests for tours, we have to pick and choose. But we’re working on ways to provide more outreach without less effort. We’re planning a virtual tour on our up and coming website and we do some efforts on specific days, like World Species Day, to get a lot of individuals in at a time.

We also have a donation and loan program, where we provide educational institutions with materials to promote conversations about biodiversity and conservation.